Warning: Trying to access array offset on value of type bool in /customers/d/8/f/metalalbumart.com/httpd.www/wp-content/themes/thestory/functions/functions-general.php on line 299
7 April, 201514 December, 2017  by Vanhelgd

Finally I am able to reveal the artwork for the Great Discord!
The process started about 1,5 year ago and have been slow but very interesting and a bit different from what I usually do when it comes to album covers (NO SKULLS!!! Fia told me on our first meeting). The band had a clear vison on what they were looking for but at the same time leaving me free to do the best with their concept. What makes this a bit special for me is that I got quite a lot of room for experimentation; I used Photography, cut and paste, prints, painting and digital painting to create the artwork. Martin Frid and Jenny Brännare helped me out in a lot of different ways, cutting out trees from paper, being models and giving me a lot of feedback! 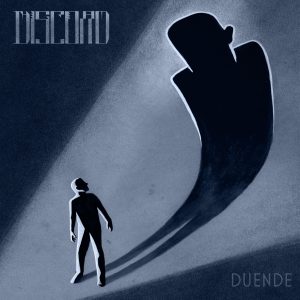 The cover art was created with gouache on paper, pen on paper and some (a lot) of digital painting and editing. The band wanted a small figure whose shadow was towering above him in a threatening way and painted in a way that reminded of art deco. 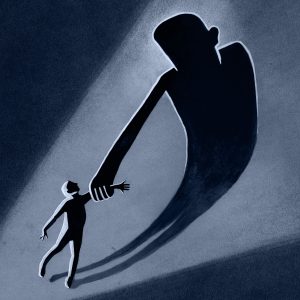 The inside of the gatefold vinyl version displays a forest with a number of figures that connects to the songs on the album. We were talking about the forest theme on an early stage and we spoke of my painting “Waiting for the dawn” as some kind of reference. I recall that we were looking for a surreal fairytale that should both be enigmatic and frightening but not really “standard”. Making this image was both interesting and time consuming. I made some really fast test images on an early stage before I presented my ideas about the forest for Aksel and Fia. With the help from Martin and Jenny I build a miniature landscape in the studio. We took some photos based on the bands ideas: a man dragging a corpse, someone mourning a dead person, an old man and so on. Then we printed them and placed them in a forest of paper trees and real branches. I used a print on a forest taped to a light box for background. When I found a shot the worked I printed it on aquarelle paper and painted on the figures and some trees, then I took a photo of the print and worked with it digitally, adding some trees, moving one figure and colored it in the same blue tone as the cover image. 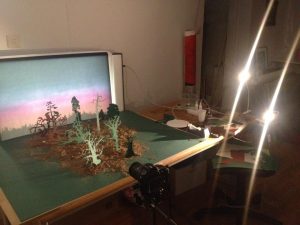 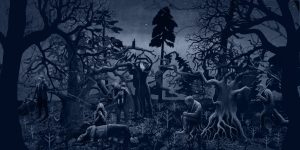 I also made four t-shirt designs, two based on the artwork and two original. 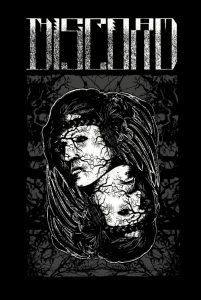 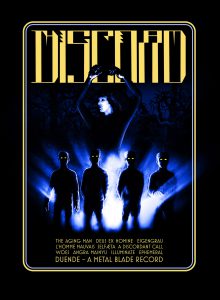