Warning: Trying to access array offset on value of type bool in /customers/d/8/f/metalalbumart.com/httpd.www/wp-content/themes/thestory/functions/functions-general.php on line 299
3 September, 201514 December, 2017  by Vanhelgd

Under the Church – Rabid Armageddon 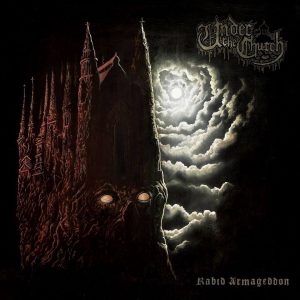 Some time ago I was asked to make a shirt design for Under the Church and I guess they liked it since they asked me to do the cover art for their first full length album Rabid Armageddon. Initially the process was quite slow, the band had an idea that I did some sketches on. While trying out the bands idea I found an old sketch that I played around with a bit and sent them. Actually I think I made it while trying out brushes in Photoshop, a Friday afternoon doodle. Both Pulverised Records and Under the Church liked it and we decided to choose that path instead. I think it was more in line with the music and it’s quite a simple design which often is good for making the album art easy to recall and remember. I think it looks like a cover for an eighties horror book or something.

The recording is grim and dirty plain old school death metal so my goal was to create something expressive and threatening rather than a nicely drawn illustration. Since I wanted it to be ruff and dirty I decided to paint it by hand in oil on panel. I experimented a lot with the underpainting using a black base and withe pens, acrylics and even some air-brush that I actually have no idea at all how to use but it worked well when shading the clouds. The oil painting was more like tinting the underpainting. I used a lot of medium to make the paint transparent and did a couple of layers. Finally I did some digital highlights and adjustments before putting the whole layout together.